Skip to content
HomeCheniere EnergyCheniere Cleared to Put Shuttered Sabine Pass LNG Tank Back In Service
Thank you for reading this post, don't forget to subscribe!

Federal regulators have given Cheniere Energy Inc. approval to return a liquefied natural gas storage tank to service that’s been closed for over four years at its Sabine Pass export terminal in Louisiana. 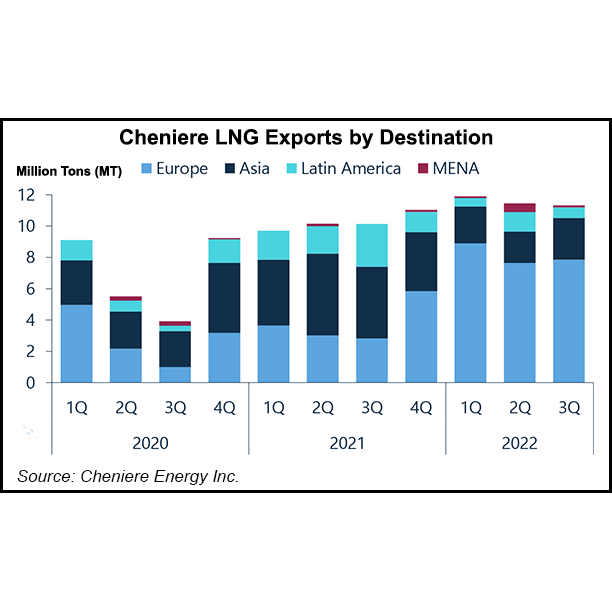 Last week, the Federal Energy Regulatory Commission and Pipeline and Hazardous Materials Safety Administration (PHMSA) approved Cheniere’s request to place the 3.4 Bcf LNG Tank 1 back in service. Tank 1 and Tank 3 have been shut since a leak and structural damage was discovered at the southwest Louisiana facility in early 2018. The tanks account for 6.8 Bcf of the roughly 17 Bcf of LNG storage at Sabine Pass.

Cheniere Spokesperson Eben Burnham-Snyder told NGI the company currently isn’t disclosing a timeline for when the tank could begin storing LNG again, but Sabine Pass will continue to “effectively and safely” manage operations with three tanks as it has since 2018.

“Our tanks are safe, our people and community are safe, and we have now included enhanced systems that only improve our safety profile,” Burnham-Snyder said.

The status of Tank 3 and its authorization for a return to service is still under review.

During a third quarter call with analysts last week, CEO Jack Fusco said LNG output from Cheniere’s terminals in Texas and Louisiana hit an all-time high of over 7 TBtu during the period amid a surge in overseas buying this year.

Since PHMSA issued a corrective action order in 2018, Cheniere has implemented a new detection program around its LNG tanks and related equipment and has upgraded its instrument systems to further prevent freezing. It has also disabled the bottom fill valves on its tanks identified as the root cause of its initial LNG leak and added new protective layers, according to the company.

Cheniere employees first discovered LNG had leaked between the inner and outer walls of Tank 3 after the super-chilled gas caused a crack in the outer tank wall. A subsequent investigation by PHMSA found that LNG had also leaked from Tank 1.